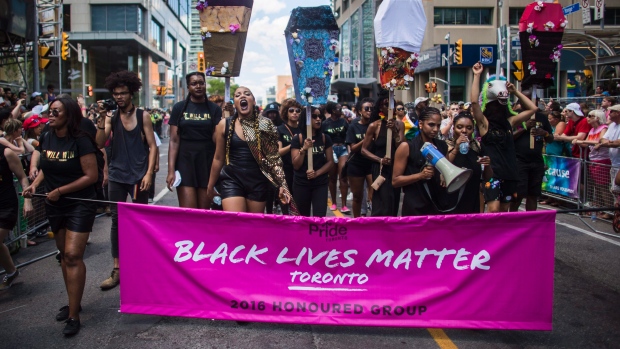 One of these struggles, apparently, is climate change. Last week, Black Lives Matter’s UK chapter chained themselves together on Britain’s London City Airport runway—shutting the airport down for several hours. On social media, the group explained that they were protesting against climate change, saying:

“Climate crisis is a racist crisis. 7/10 of the countries most affected by climate change are in sub-Saharan Africa. By 2050 there will be 200 million climate refugees. Black people are the first to die, not the first to fly, in this racist climate crisis.”

Black Lives Matter may have gained traction in the streets of Fergusson, but its footprints are now all over London, Sydney, Paris, and Toronto.

Black Lives Matter Toronto (BLMTO), like its American counterpart, claims that its government implements systematic racism against Black people. Like the original Black Lives Matter chapter, they protest police killings of Black men like Andrew Loku and Abdirahman Abdi, claiming that the officers use of lethal force were unjustifiable.

What sets Black lives Matter Toronto apart from other Black Lives Matter chapters, however, is that though Black Lives Matter as a whole is integrally a feminist and LGBTQ group, the Canadian group is considerably more vocal about its feminist and LGBTQ roots than its international partners. In fact, if Black lives Matter UK is adamant that the movement is a global struggle, BLMTO maintains that the movement is a multifaceted struggle against systematic racism, systematic sexism, and systematic homophobia. For instance, the group describes its Black Lives Matter-Toronto Freedom School as a program designed to “engage children in political resistance to anti-black racism and state violence” — through a trans-feminist, queer-positive lens — and offer “an entry point into the #BlackLivesMatter movement.”

Canada’s history with anti-Black racism may not be quite as extensive and severe as our southern neighbours’, but it is nevertheless worthy of consideration when addressing Black Lives Matter Toronto. By the time the British Empire granted our nation its independence in 1867, the relatively small number of Black slaves in the land (approximately 1, 000) had been granted freedom for over 33 years. And though some White Canadians attempted to segregate Black Canadians like Viola Desmond, for example, Black Canadians did not widely suffer under a Canadian version of Jim Crow laws. Canada’s indigenous people suffered systematic racism for decades; however, despite the occasional racist event, Black Canadians from the Underground Railroad or airplanes from Ghana have always lived under relative justice and peace in Canada.

In 1967, Martin Luther King walked the streets of Toronto, marveling at Toronto as if Torontonians had already realized his dream. Then he delivered a speech at the University of Toronto, saying, “Deep in our history of struggle for freedom, Canada was the North Star – the star followed by the Underground Railroad. We sang of ‘heaven’ that awaited us and the slave masters listened in innocence, not realizing that we were not speaking of the hereafter, Heaven was the word for Canada.”

Nearly 50 years after Martin Luther King’s words, when race-relations are even better than they once were in Toronto, Black Lives Matter Toronto maintains that the Canadian government, particularly the Toronto Police Service, is anti-Black.

At the heart of Black Lives Matter Toronto’s campaign against the Toronto Police Service’s policing is the agency’s carding policy, which the group claims, “is racist and anti-black.”

The Toronto Police Agency initiated the carding policy to stop, and document citizens for intelligence and investigative use. Black Lives Matter Toronto’s allegations concerning the policy, however, stems mostly from the uncomfortable reality that Black Torontonians are apparently three times more likely to be carded than White Torontonians.

Law enforcement agencies are not merely instructed to respond to criminal behaviour, they are also responsible for preventing criminal behaviour. This is why, the Toronto Police Service, despite the obvious imperfections with carding, continue to implement the policy.

It is also important to recognize that racism isn’t necessarily evidenced by disparities. If that were the case, one could make the argument that since men are far more likely to be carded than women, carding is sexist toward men. To be clear, it is possible that anti-Black sentiments by some police-officers may be the reason why Black Torontonians are more likely to be carded than White Torontonians. Nevertheless, there is still zero evidence to support Black Lives Matter Toronto’s position that carding is racist.

It is entirely plausible—and in my opinion, more likely—that Black Torontonians are more likely to be carded than White Torontonians because the Jane-Finch area, where most carding practises take place, is predominately a Black neighbourhood, which sadly, also happens to be the most crime-ridden neighbourhood in Toronto.

A couple of months ago, Toronto Police Service leaders—including the police chief, Mark Saunders—and community leaders from the Jane-Finch area marched in solidarity against the neighbourhood’s culture of violence. Notably missing from the march, however, was Black Lives Matter Toronto. Instead, BLMTO were concentrating their campaign all the way to Ottawa—where Abdirahman Abdi was killed by police officers after resisting arrest following allegations that he sexually assaulted several women.

I find it alarming, though, that 50 years ago, Martin Luther King’s American dream looked like Canada. Today, however, Black Lives Matter suggests that Toronto is a racist hell hole.