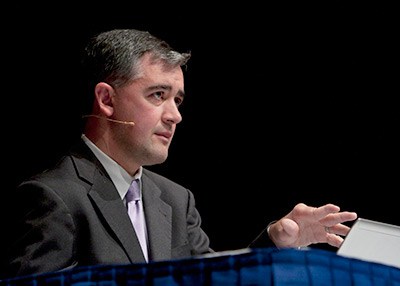 A Letter To A Ghost

Yesterday, I shared the first part of my interview with Justin Peters. This is the remainder of the interview.

Have you received opportunities to talk to prominent Word-Faith teachers? How do they react to your ministry?

A couple. I have contacted several of their ministries to try to get an interview but I’ve always been turned down. I have managed to speak briefly with Joel Osteen and Jesse Duplantis. With Osteen my wife, Kathy, and I were at his church (not for edification, but for research) and I waited in line with a couple hundred other people to meet him. He came to me, shook my hand and said, “Glad to have you here with us today.” I said, “Mr. Osteen, may I ask you a question?” He replied “Ok.” I asked, “Why do you never preach on sin or the wrath of God?” He said, “Well, that’s not how we do it here. I want to talk about his love and mercy.” I responded, “But the mercy of God makes no sense until we first understand we deserve the wrath of God.” He said, “Well, that’s just not how we do it. We had (some number – I forget exactly) thousand people come to Christ last year.” I replied, “If they did not understand they are sinners and must repent they did not come to Christ.” At that point he walked away and went to the next person.

I met Duplantis at a book signing table after one of his services. I bought one of his books (again, for research) and waited in line for him to sign it. As he was signing my book I said, “Mr. Duplantis, may I ask you a question?” He said, “Sure.” I said, “You teach that it is always God’s will to be healed, correct?” “Absolutely,” he responded. “Then why do you wear eyeglasses?” Obviously caught off guard, he hesitated for a moment and then said, “Oh, I’m not sick, that’s just my body wearing out.” I said, “But the reason we get sick is the same reason our bodies wear out. It is because the Fall is taking its toll on us.” As soon as he realized I kind of knew what I was talking about, he got quite agitated and ushered me on.

So, I’ve managed to talk to Duplantis and Osteen but neither wanted to be challenged.

I have, however, been to 17 Hinn crusades, several Kenneth Copeland meetings, Duplantis, Meyer, etc., and I always make it a point to talk and witness to as many people as I can. I grieve for them but grieve even more that the gospel is being distorted and the name of Christ blasphemed.

You are one of the initial signers of the Statement on Social Justice and the Gospel. That seems like a big departure from what you’re largely known for. How did you become involved in the social justice topic?

Well, it is true that my work in Word-Faith is that for which I am most well known but it is not at all my only interest. I’ve been theologically type cast, I guess you could say. My first love and commitment is expository preaching. I’m also concerned about many other issues that face the evangelical (whatever that term means nowadays) church.

Social justice has been the bread and butter for the mainline denominations and Roman Catholicism for some time but in recent years it has made alarming inroads into theologically conservative and reformed circles. Social justice rumblings have been around for a while but really were not widely recognized until earlier this year. Some were sounding the alarms and we should have paid more heed. I began studying it more in depth and engaging it some on Twitter. The MLK50 conference was incredibly worrisome because it treated Martin Luther King, Jr. as a man who embodied some perfect blend of Christianity along with social activism. We are all grateful that God, in His providence, used King to bring about some very needed and very overdue societal changes but he was not a Christian. He was a man who denied the bodily resurrection of Jesus and indeed, on his most orthodox treatment of it, said it really did not matter one way or the other. His life was one marked with sexual promiscuity up to and including the night before he was murdered. Unless he had some Damascas road conversion literally in the hours before he was shot, he died an unregenerate man. To affirm him as a Christian is to diminish the Gospel.

I spoke with Josh Buice about the social justice movement on the phone one day in the spring and he told me of the meeting that was being planned in Dallas in June to begin planning a response to what we were seeing. Josh invited me to participate. I was grateful for the opportunity.

There are similarities in that they are both man-centered and both appeal to benefits which we may want but to which we are not entitled. The prosperity gospel appeals to the desire to be wealthy and physically healed. Almost everyone on the planet wants those things. That is why it is so enormously popular.

The social gospel plays on man’s fallen desire to see himself as a victim of some injustice and therefore entitled to some type of restitution or preferential treatment. Some of these injustices are real, some are perceived. But none of us is entitled to have these injustices made right here on earth. Now, I do not want anyone to misunderstand me and think me callous. It is not that we deny injustices have been done because they certainly have. It is that we are not owed the rectification of those injustices here and efforts to that end are not inherently part of the gospel.

All of us have been slighted in some way. I have to live with cerebral palsy and things that most people do in a few minutes almost without thinking – like getting dressed – take me nearly two hours. Would it be nice to not have to struggle with a body that does not work? Would I like to be able to go hiking in the mountains or even be able to carry a book from one room to the next? Do I wish steps and stairs did not prevent me from going into some stores and many homes? Of course! But, I am not entitled to these things and they are not part of the gospel. For an article I wrote on this, please see Thanks for Nothing. The biblical reality is that none of us is a victim. We are all rebels and the only justice to which we are entitled is justice for our sin; the wrath of God. But that is justice we do not want.

Absolutely. There is no logical or theological reason to think otherwise. It has been pointed out, and rightly so, that if everything is a gospel issue then nothing is a gospel issue. The gospel becomes so broad and nebulous that it really loses all meaning and loses any distinction that it enjoys from any other secular philanthropic effort or organization.

Whenever we say that the gospel is salvation by grace through faith plus (fill in the blank), whatever comes behind the “plus” becomes the focus. For the Galatians the “plus” was circumcision. For the Roman Catholics the “plus” became works and the mass. For the mainline protestant denominations it became social justice.

One of the things that alarms me so much about the social justice movement even above that of Word-Faith/NAR is that it is in our camp. We certainly have some people in our pews that are influenced to one degree or another by the likes of Joel Osteen or Joyce Meyer but it is practically unheard of that soteriologically reformed, cessationist pastors would be theologically influenced by them. With the social justice movement it is a much different story. This way of thinking is influencing some of the heavy hitters in our own theological orbits in a way that the prosperity gospel never has.

If I may, I’d like to mention one of the things that grieves me so much about this movement. This movement has fomented a division and distrust between brothers and sisters in Christ of different ethnicities. Kyle J. Howard, for example, tweeted publicly that he would fear for his physical safety if he was in a room alone with Dr. James White. That is an absolutely unconscionable thing to say.

One of the great joys that has been mine as an evangelist is the fellowship I have had with brothers and sisters in Christ all over the world. It does not matter where I am, what culture I am in, how much or how little the people have – when I am with like-minded believers in Christ there is an instant bond, an instant fellowship and an instant kindred spirit I have with them. I do not care what color their skin is nor do they care what color mine is. I have an instant love for them and they for me. I would give my life for them and they would for me as well – because we are family. That is something that only the gospel can create and to suggest, as many in this movement have, that there is some inherent racism within the true body of Christ is to diminish the power of the gospel. This grieves my heart greatly.

Do you have any questions for me, sir?

I am really hoping that I have the opportunity to meet you one day. I would love to sit down and spend some time with you to get to know you better. Until then, though, if I may ask 3 questions:

Thank you again for this opportunity, Samuel. Blessings to you, brother.