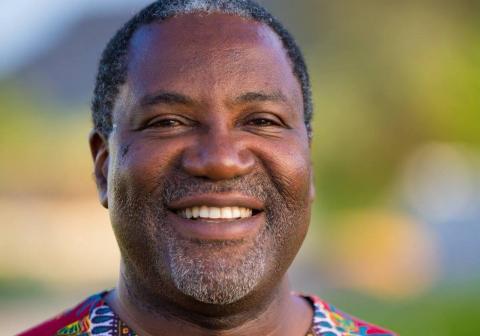 When I became Reformed over a decade ago, I was convinced I was the only Reformed African at the time. All my African friends looked at me with bewilderment when I first talked about Reformed theology with them. But then in one of his sermons, Paul Washer mentioned a pastor from Zambia he named “the African Spurgeon”, and that’s how I discovered that I wasn’t the only Reformed African in the world—that’s how I learned about Conrad Mbewe.

Conrad Mbewe is the pastor of Kabwata Baptist church in Zambia. He’s the co-founder and Senior Lecturer at African Christian University and the principal at Lusaka Ministerial College. He is also a board member at Central Africa Baptist College and the Covenant College Zambia, and the editor of Reformation Magazine. He is also the author of several books, including Foundations For The Flock (2011), Insights from the Lives of Olive Doke and Paul Kasonga for Pioneer Mission and Church Planting Today (2014), and Pastoral Preaching—Building a People for God (2017).

And It’s my distinct privilege to interview him today.

Sir, since the Lord called you to pastoral ministry at Kabwata Baptist church over thirty years ago, the church became reformed within five years, the church’s membership is eleven times larger, and you’ve helped plant over thirty reformed churches. So from your perspective, is Zambia and Africa more receptive to the true gospel today than it was thirty years ago?

Whereas all your data about me and the work I have been involved in is correct, I would not say that I have observed any major change over the last thirty years in terms of receptivity to the gospel among people on the continent of Africa. Generally speaking, Africans are open to discussions about spiritual matters and respect individuals who come to them “in the name of the Lord” (however they understand that). In that sense, there is an open door for the gospel and we have done our best to take advantage of that. I think that this door will not remain open for too long because of atheistic educational philosophies. However, for now the door remains open.

Sadly, the prosperity gospel continues to grow unabated on the African continent. The primary reason, I think, is because it is largely a Trojan Horse within the Charismatic movement, which in turn is part of the Evangelical movement on the continent. Thus, it is seen as part of orthodox Christianity. This is what makes it hard to address it. The most well-known prosperity gospel preachers in Africa have risen to the top (in terms of publicity) of the Charismatic movement and are, therefore, its perceived leaders in the popular mind. The few leaders in that movement who try to be balanced are a faint echo in the background that hardly anyone hears. Because of this, I can only see the prosperity gospel growing rather than stalling or dwindling on this continent.

What are the realistic steps toward reformation in Africa? What practical role should Western churches play in that endeavor?

That is a very difficult question to answer because Africa is very wide. Obviously, to begin with, we must ensure that we have a growing number of local churches that truly represent the biblical norm of what local churches should be in doctrine and practice. In order to ensure this, we need to have more and more pastors and other leaders of the churches that already answer to this description involved in serious church-planting missions work. They need to also be more visible so that their orthodox message can spread. We need to use the print and electronic media a lot more to ensure that biblical Christianity is on the information floor of the young intelligentsia on the continent. I am not sure that there is a greater role that the Western churches should be playing than they are already playing. The task is now ours as African church leaders to hold the bull by the horns and get to work.

I fully agree. Men and women who are well below the poverty datum line often want a quick fix. Anyone who gives them the impression that he is reeking with anointing to turn their fortunes around soon gains a mega-following. This is definitely part of the explanation. I do not think that our task as a church is to look for social changes in order to address spiritual issues. As Jesus once said, “The poor you will always have with you.” Our task is to hold above all the noise of the false gospels the nature of the true gospel—the gospel that truly saves sinners from sin and hell. We should light true candlesticks so that across the African landscape the elect of God can see the light and be called into the kingdom. Error will always be with us. We must, however, ensure that the truth is not hidden under bowls. Those who come to true saving faith in Christ will see through the thin veneer of pretense and deceit in the prosperity gospel and shun it with disgust. That is the ultimate hope for Africa.

In your article, “Why There’s No Such Thing as African Christianity”, you wrote: “the difference between American and African pastors is very superficial. Would you expand on that further? What would you say to Western pastors who feel pressure to adapt their ministry to attract African members?

That is a very important question. To begin with, I was writing from the perspective of what I am seeing on the African continent. I was not writing with a London or New York church situation in mind, though the principles still apply. My concern is that there is a false view that our most relevant task as Christians in Africa today is to remove the robes of Western Christianity from biblical Christianity and then clothe it with an African attire. Too many people are spending precious time and energy on this wild goose chase. What I am seeing as a result of this agenda is totally ridiculous. That should not be our concern because in reality “the difference between American and African pastors is very superficial”. Rather, I would say to Western pastors who feel pressure to adapt their ministry to attract African members that our primarily concern should be that of making disciples of all nations…and teaching them to observe (obey) everything that Jesus has commanded us. We should be so focused on the glory of God in the face of Jesus Christ that all our superficial differences pale into insignificance. That is what I love about the Reformed Faith and the doctrines of grace. You get so enamored by the majesty of God and his indescribable love for sinners that you totally forget your skin color and your cultural “issues”. God becomes all in all!

Many Africans throughout the Diaspora have embraced reformed theology. But I’m not sure if that’s benefited Africa. It seems at times that we have forgotten our motherland. What do you think, sir? How should we Africans in the West help Africa? And does this extend to Black Westerners?

I am not the best person to comment on this because I have had very few direct dealings with Africans in the Diaspora. I have very little close interaction with them for me to know what they are doing as individuals for the church back home on the continent. I tend to relate to churches in the West rather than individuals. Many of them have members of African descent. I rejoice to see such healthy multi-cultural churches that represent the environment in which they are while glorying in the grace of God. When I have asked for help, these churches have come forward to help. I think that as long as the Africans in those churches continue to remind their leaders not to forget the needs of Africa in their prayers and financial giving I would not pressurize them beyond that.

Sir, this is the most crucial question of the entire interview: which is better, Ghanaian jollof or Nigerian jollof? Your discernment is on the line.

Ha! I do not even know what jollof is. This is where I wished I had the extraordinary gift of discernment. I was about to Google it but decided that in this case ignorance may be bliss!

Do you have any questions for me, sir?

My guess is that you have lived on both sides of the Atlantic. If I am correct, what do you think Africans in the Diaspora who have embraced the Reformed Faith should be doing as a sign that they have not forgotten the motherland? How should they help Africa? I am very interested in your perspective.

Yeah, I moved from Ghana to Canada when I was 10 years old. It’s hard to believe that was over 21 years ago!

Sir, when Voddie Baucham moved to Zambia to become the Dean of Theological Education at African Christian University, I was so thrilled that Dr. Baucham sacrificed comforts in America to serve our Lord in Africa. But it also made me sad. I realized that throughout all my conversations about ministry with hundreds of reformed Africans in the diaspora, I can’t think of single instance when anyone of us expressed a desire to sacrifice our comforts on this side of the Atlantic so we would return to Africa for ministry.

I am thrilled that so many of my dear African brothers and sisters are serving in local churches in Canada, America, and England, but I wish I could name a single person from the many of us who embraced Reformed theology in the West who has moved back to Africa to serve our Lord.

And though many of us are maybe unable to move to Africa, I think Africans like me need to do a better job supporting ministries in Africa. For instance, one simple but crucial way we can start supporting African ministries is by donating to the African Christian University.