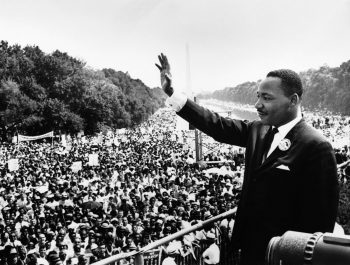 If indeed American police officers are failing to live by their motto—to serve and protect— when it concerns Black people, it wouldn’t mark an unparalleled period in American history. America’s role in the Slave Trade, and the nation’s Jim Crow laws in the early 20th century suggest that for much of American history: Black lives did not matter.

In the United States Declaration of Independence, Thomas Jefferson (who later became the 3rd American president) wrote: “We hold these truths to be self-evident, that all men are created equal, that they are endowed by their Creator with certain unalienable Rights, that among these are Life, Liberty and the Pursuit of Happiness.”

And yet, Jefferson, who at one point owned more than 600 slaves, later said: “Blacks…are inferior to the whites in the endowments both of body and mind.”

These events may not be relevant to some people. I assure you, however, that Black people are not forgetful of the horrors of slavery and Jim Crow—and nor should we be. Still, our lack of forgetfulness is apparent when Black Lives Matter says, “a system cannot fail those it was never built to protect.” Or when Lecrae shares this on America’s Independence Day. And certainly, our lack of forgetfulness is apparent when we Black people readily list the horrors of slavery and Jim Crow as a defense of our rash and presumptions accusations that White police officers who kill Black men such as Alton Sterling and Philando Castile did so for no other reason but racial prejudice.

In the most climatic decade of the Jim Crow era, Martin Luther King stood at the Lincoln Memorial on the 100th year anniversary of Lincoln’s Emancipation Proclamation—which effectively abolished slavery—to share his brilliant, “I have a Dream Speech.” Some of the most famous words in the speech include:

“We can never be satisfied as long as our children are stripped of their self-hood and robbed of their dignity by signs stating: “For Whites Only.”

“I have a dream that my four little children will one day live in a nation where they will not be judged by the color of their skin but by the content of their character.”

“And when this happens, and when we allow freedom ring, when we let it ring from every village and every hamlet, from every state and every city, we will be able to speed up that day when all of God’s children, black men and white men, Jews and Gentiles, Protestants and Catholics, will be able to join hands and sing in the words of the old Negro spiritual:

Thank God Almighty, we are free at last.”

There is however one section of the speech that many tend to miss, despite its importance in the speech, and really, its importance to much of Martin Luther King’s endeavors during the Civil Rights Movement:

“But there is something that I must say to my people, who stand on the warm threshold which leads into the palace of justice: In the process of gaining our rightful place, we must not be guilty of wrongful deeds. Let us not seek to satisfy our thirst for freedom by drinking from the cup of bitterness and hatred. We must forever conduct our struggle on the high plane of dignity and discipline. We must not allow our creative protest to degenerate into physical violence. Again and again, we must rise to the majestic heights of meeting physical force with soul force.”

Some claim that Black Lives Matter is the 21st century version of the Civil Rights Movement, but that couldn’t be further from the truth. Martin Luther King often addressed the issue of bitterness and hatred for white people among Black Americans largely to combat Malcom X and the Nation of Islam’s ideologies, which in my opinion, is far more comparable to Black Lives Matter ideologies. Actually, Black Lives Matter openly state that their ideologies are inspired by that of the Malcom X-inspired Black Panthers’ Party. Notably, that of Assata Shakur, who is on the FBI’s Most Wanted Terrorist List.

Martin Luther King did not merely dream about a world where white people would cease from racism. His dream also consisted of a world where Black people would cease from bitterness and hatred. Sadly, however, bitterness has become an accepted reality within the Black Lives Matter culture, just as it was within the Nation of Islam and the Black Panthers Party.

We have become drunk from the cup of bitterness. So much so, that many Black people now unashamedly share the same types of racist attitudes that we so readily denounce among some white people. When we so rashly suggest without evidence or due process that white police officers who kill Black Americans do so because of their racial prejudice, we are judging the white men not by their character, but by their skin colour. That is racism.

Of course, this is not to suggest that some white police officers aren’t racist. Nor does it mean that some of the 138 Black Americans killed by officers were not wrought by racism. A number of them may have been a result of racism. However, there is simply zero evidence to support that any of the 138 Black Americans were killed as a result of racism. Suspicion is sinful, not factual.

Bitterness often robs us from the sweet discovery of truth, which then consequently robs of freedom from the things that troubles us most. Indeed, police officers kill a Black American every 38 hours. However, every 4 hours, a Black American kills another Black American. And every day, Black parents 1,207 Black children.

There is simply no evidence to suggest that white police officers are trying to kill Black Americans. However, there is plenteous evidence that Black Americans are murdering each other, including their own children.

And yet, despite the fact that the majority of Black-on-Black crimes are unsolved, and despite the fact that unborn Black children are still ever being killed at an ever increasing rate, Black Lives Matter remains largely silent on Black-on-Black crime and cheerfully approve abortion, claiming that it is a matter of equality for Black women. As we continue to misdiagnose the destructive problems within Black communities, more die. Apparently, the most prevalent and provable cases of Black lives not mattering is an unworthy trending topic for Twitter and Black Lives Matter. Perhaps because they are real cases of injustice in a world that is increasingly more concerned about social agendas than real social justice.

These are indications that Martin Luther King’s dream, however admirable, are merely the wishes of a dreamer. The great dreamer’s wishes will never truly be realized in this world. Thankfully, Jesus Christ is not a dreamer; He is the Great Redeemer. He is the One who saves the White racist from his sins, and the One, who frees the bitter Black person from his sins. And it is only in His second coming, when he ends puts an end to sin, creates a new earth and a new heaven, that all will live with Him in perfect peace and unity. Only then, will we all be truly free, at last.

Until then, let us remember these words:

Strive for peace with everyone, and for the holiness without which no one will see the Lord. See to it that no one fails to obtain the grace of God; that no “root of bitterness” springs up and causes trouble, and by it many become defiled – Hebrews 12: 14-15