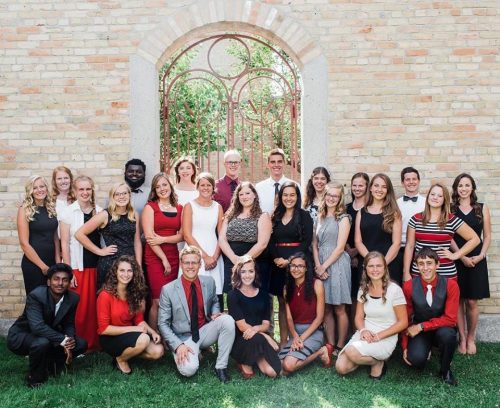 Over the last four months my alarm was set at 4:00 am—3 hours after my bedtime at 1:00 am. But between the 21 hours of little rest every day: I had the time of my life.

I wanted to receive excellent training in pro-life apologetics, strategy, leadership, and activism, and I wasn’t disappointed. CCBR has become precious to me.

When I was a teenager, a friend asked me, “Sam, what would you say to a girl considering an abortion?”

I was honest with her. I told her I don’t know. I was 18 at the time. I wasn’t a Christian. I wasn’t a critical thinker. And I didn’t care to think about abortion. I thought she was asking a hypothetical question. I didn’t know she was asking for help.

So the first week into the internship, I wrote a letter to myself and sealed it until this past week when I finished the internship. I had my friend, her baby, my failure in mind when I wrote, “I want to convince at least 30 people to change their minds on abortion.”

So at 4:00 am every morning, the first of 5 alarms sounds off. That alarm is designed to keep me between what I need to do and what I want to do. At 4:00 am, as you can imagine, I still desperately want more sleep. However, I need to start my day if I want to be on time for work at 6:45 am. So that alarm wakes me up, but it doesn’t get me up from my bed. The alarm is strictly designed to ease my transition from little sleep to a lot of work.

For the next 10 minutes, I lay in bed falling in and out of sleep, until the the second alarm at 4:10 am. That alarm is my cue to pick up my Bible and read a Psalm. For the next 20 minutes, I read a Psalm and prayed through it. I ask God for strength for the day, wisdom for me and my colleagues, and changed minds on abortion for the strangers we would talk to. The third alarm at 4:30 prompts me off my bed and drags me into the shower.

The fourth alarm sounds off at 5:00 am, reminding me that there is only 25 minutes remaining until the public transit takes off from my stop. These reminders are helpful, as I am still sluggish at this time. So I pack my lunch and other important items into my bag at this time. I rarely eat breakfast—eating breakfast that early in the morning usually makes me sick. At 5:15 am, the fifth and final alarm sounds off, I need to head to my stop immediately if I want to catch the public transit on time. It’s only a five minute walk, but I tend to run to the stop, forcing myself to fully wake up.

My commute to work is a little over an hour in the morning. I arrive at 6:35 am, 10 minutes before we begin on our projects for the day. At 6:45, I join my team in a van, and we drive to a neighbourhood within the Greater Toronto Area and deliver pamphlets featuring abortion victim photography and pro-life arguments to thousands of homes.

After 3 hours or so, we drive to a high school or busy intersection anywhere within the Greater Toronto Area. There, we hold large signs featuring images of dead fetus ranging from 7 weeks old to 5 months old. As you can imagine, this illicits plenty of anger from strangers. We don’t wish for that, but our research shows that just as activists within the abolitionist and civil rights movement used victim photography to change people’s minds on slavery and segregation, our images effectively change people’s minds on abortion.

After this, our team drives to another busy intersection, and there we set up two massive banners opposite each other, banners that are visible on all sides of the intersection, to attract as many witnesses as possible. After a couple of hours, we remove our banners and drive back to the office, where we finish our reports for the day. By the end of it all, it’s usually about 6:00 pm.

The traffic at this time, however, is much worse than it is in the morning. So the commute home is almost twice as long as the commute to work. It usually takes me almost 2 hours to get home. So most of the time, I don’t arrive home until 8:00 pm. I don’t remember most of it, though. I try to prep for an article on my commute, but it usually ends in an impromptu nap next to a stranger.

When I get home, I am usually too tired to do much of anything at first. So I usually rest on the couch, watching television for about an hour. At 9:00 pm, I talk to my girlfriend, Annie, for another hour or so. Then I prepare my dinner for the night and lunch for the next day from around 10:00 pm until 11:30 pm. Once I finish my dinner, I head back to my room to make a last ditch effort to write an article. I am naive enough to think that I have enough energy to write something, anything by that time. That predictably ends in failure. Then by 1:00 am, I am sound asleep until the alarm sounds at 4:00 am.

The last 4 months were difficult, but I enjoyed every single minute of it. The internship is one of the greatest things I’ve ever done in my life. It gave me an opportunity to do for strangers what I couldn’t do for my friend so many years ago. I am happy to say that I am just 1 member of a group of 20 people this summer who reached over 1.3 million people in the Greater Toronto Area with the truth that abortion is a grotesque violation of human rights.

I am forever grateful for CCBR, my fellow interns, and many of you for donating your hard-earned money to support my internship. So many of you generously donated over 4, 000 dollars collectively to me to make this possible.

So that is why I wasn’t writing. I’ve been a little busy. But I am now sleeping more than 3 hours a night. And I have plenty of energy to write more consistently. And I will begin with an article on why I want you to see images of aborted fetuses.