Mary Turner was a mother of three. She was a wife to Hayes Turner. She was a woman of colour—and that’s why she was killed in Lowndes County, Georgia.

Mary Turner was thirty-two or thirty-three years old when it happened. The day earlier on Saturday May 18th, 1918, Mary Turner’s husband was arrested by police officers for allegedly playing a role in Hampton Smith’s murder. Hampton Smith was an abusive White plantation owner, who hired poor Black workers including Hayes Turner and Mary Turner to work on his plantation.

Hampton Smith was shot and killed by Sidney Johnson, one of his Black workers in early May, 1918. Sydney Johnson fled the scene and went into hiding.

That Saturday night, police officers escorted Hayes Turner out of prison and handed him over to a White supremacist mob. The mob attacked Hayes Turner and dragged his body to a tree, where they hanged him. His corpse hung from the tree for two days until it was finally cut down the following Monday.

Mary Turner protested her husband’s killing from that Saturday night until Sunday afternoon when she was captured by the White supremacists mob. On Sunday, May 19, 1918, Mary Turner was a widow for one day, pregnant for eight months, and tortured for hours.

Between attacking Hayes Turner on Saturday night and Mary Turner on Sunday afternoon, the White supremacists went to their local churches on Sunday morning, where they listened, apparently to the gospel, sang hymns, and assembled again in the afternoon to kill Mary Turner.

That afternoon, the White supremacists tied Mary Turner’s hands and ankles and hung her upside down on a tree. Then they soaked her with gasoline and burned her alive. While she screamed in agony, they slit her stomach open with a knife, and her pre-born baby fell to the ground crying. The White supremacists stomped on and crushed the baby’s head.

Then the mob shot hundreads of bullets into Mary Turner’s body. By the end, Mary Turner’s corpse hung from the tree with bullets, blood, and without a baby.

Emmett Till’s body was discovered three days later in a river. He was unrecognizable. He was naked. His body was disfigured. His neck was wrapped by a barbed wire tied to a fan blade to weigh him down the river. His face was impossibly swollen. He had a bullet wound just over his right ear. One of his eyes was gouged out. He didn’t look like Emmett Till anymore. He was identified only by the initials on his ring.

Roy Bryant and J.W. Milam were charged for Emmett Till’s murder. At their trial, they confessed to kidnapping Emmett Till, but they claimed they released him soon after. They suggested they didn’t kill Emmett Till. They contended that the body retrieved from the river wasn’t Emmett Till’s body. In fact, they insisted Emmett Till was still alive.

The all-White jury in segregated Mississippi deliberated for only an hour before they declared Roy Bryant and J.W. Milam innocent. One of the jurors’ said, “If we hadn’t stopped to drink pop, it wouldn’t have taken that long.”

A year after the trial, Roy Bryant and J.W. Milam admitted in an interview that they killed Emmett Till.

May 19th, 2018 marked the 100th anniversary of Mary Turner’s lynching. But no one knew. No one cared. However, last week was the the 63rd anniversary of Emmett Till’s death, and it received attention on mainstream media and social media. In fact, last month the United States Department of Justice reopened the Emmett Till case for the second time in 20 years.

Mamie Till Bradley invited photographers, journalists, and reporters to publicize what segregation had done to her son. The pictures of Emmett Till’s corpse irritated some Americans, incited a national debate over segregation, exposed segregation to the international media, and ignited the Civil Rights Movement.

Time Magazine said, “For almost a century, African Americans were lynched with regularity and impunity. Now, thanks to a mother’s determination to expose the barbarousness of the crime, the public could no longer pretend to ignore what they couldn’t see.”

Abortion victim photography angers pro-choice people and hurts some post-abortive women. But every social reform movement throughout history made the diffilcult choice of risking offending people to establish justice. The abolitionists offended people when they shared copies of the Brookes slave ship diagram. And Mamie Till Bradley and the Civil Rights Movement offended people, including Black mothers who lost their own sons to lynching when they shared images of Emmett Till’s corpse.

Mamie Till Bradley didn’t enjoy sharing images of her sons’ corpse to anyone. But she understood that it was an effective strategy to end segregation, and she was right. Emmett Till’s images helped establish the Civil Rights Acts in the 1950s and 1960s, which abolished segregation.

People die, pictures don’t. Pictures keep dead people alive. Victim photography protests injustice and preserves the victims names and stories. Aborted babies do not have names, but they have stories. And if we want to tell their stories to the world, we need to show their pictures to the world. If we don’t want aborted fetuses to be forgotten like Mary Turner, if we want their stories known like Emmett Till’s, we need to embrace abortion victim photography. Because pictures never die. 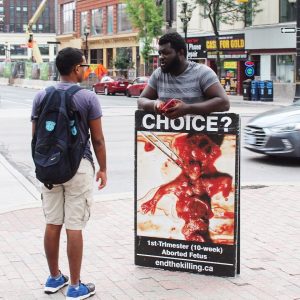