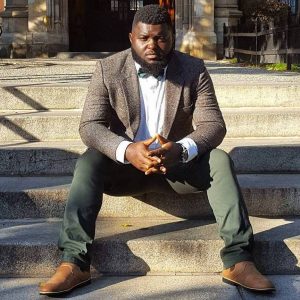 I saw my father for the first time when I was nineteen. He was also nineteen at the time. I didn’t stare at him for long. I moved my eyes away from him after a few seconds. I had seen all I wanted to see. So I gave the picture of my father back to my mother and walked away before she could see me in tears.

But I was relieved. My father looked nothing like me. He was short, much shorter than I imagined. I am six-foot-tall. He was slim, much slimmer than I am. He is probably half my size, literally. I am 270 pounds. I look nothing like my father and that made me glad. I figured that since I didn’t look like him, then maybe, just maybe, I won’t be like him either.

I spoke with my older sister for the first time a few weeks ago—over the phone. I didn’t know I had an older half-sister until a few years ago. She’s mentioned that we might have younger siblings from Nigeria. She heard that two twenty-something Nigerians also named Sey were once in her town looking for their Ghanaian siblings. They were looking for her, me, and our other brother. They did not find us.

She was about ten years old and I was a few months old when David Sey decided that he no longer wanted to be her father or mine. Last we heard, he moved to Nigeria and may have started a new family. She hasn’t seen or heard from him in almost thirty years. No one has. We don’t know if he is still alive. I suppose that’s what he wanted. He wanted to be dead to us. And all my life, I have been haunted by his ghost.

The only memory I have of my father is that I once saw what he looked like in a photo. And that bothers me more than I let on. I used to ask my mom everyday if daddy was finally coming home. Even at the age, I knew it hurt my mother to think about how to answer me. So I stopped asking her about my father when I was five years old.

I still have so many questions, though. For one, what does fatherhood look like? Fatherhood has always been an abstract idea to me. I love that God has adopted me as his own son, but it is still hard for me to grasp it. Sometimes, one of the most difficult words in the Bible for me to understand is,“Our Father in heaven.”

My girlfriend tells me that she’s noticed that I have never called God “father” when we pray together. She’s right. I understand that God is positionally my father, but not personally. I know that God is my father theologically, but not experientially. I don’t know how to petition a father. My father has never given me anything. How do I pray to my father in heaven when I’ve never had my father at home?

I have to remind myself that my father is in heaven, not Nigeria. God is my father and hallowed be his name. His will be done at home as it is in heaven. For thirty years, he has given me daily bread. God saves and he stays. He will never leave me nor forsake me. God doesn’t look like David Sey.