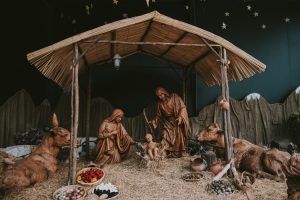 Why Americans Own Guns

Many of us know how the second person of the Trinity became a man. We know that 2000 years ago in Israel a young woman named Mary was betrothed to a man named Joseph. We know that the angel Gabriel announced to her that though she is a virgin, she will conceive a child by the Holy Spirit named Jesus, the promised Messiah. We know that though Jesus is the Son of God, and not Joseph’s biological son, Joseph married Mary and led his pregnant wife to Bethlehem, where Jesus was born.

God became a man because man sinned against God. When Adam and Eve disobeyed God in the Garden of Eden, humanity became corrupted and condemned. That is why Adam and Eve’s son, Cain, murdered his brother, Abel. That is why children learn to lie on their own. That is why you and I have not gone a single day without sinning. We are unrighteous by nature, and a righteous God cannot overlook that. Which prompts Job to ask, “how then can man be in the right before God? How can he who is born of woman be pure? (Job 25:4)”

Through Adam, humanity cannot be right before God; through Adam, no one born of a woman can be pure–except for Jesus. He is conceived by the Holy Spirit through a virgin birth. He is born righteous. He is born pure. Though he is fully man just like us, he is not corrupted by Adam’s sin. For that reason, though Adam’s sin made many sinners, Jesus became a man so that he could make many righteous.

That is the Christmas story. The Son of God became the son of a woman. The faithful creator became a fetus. The bearer of God’s wrath became a boy. The maker of the universe became a man. He was tempted like us but without sin, unlike us. He obeyed God in the garden of Gethsemane, unlike Adam in the Garden of Eden.